I accidentally made money with Tesla stock options seven times

In the last year, I traded Tesla stock options. I made money on all my trades.

I describe what I did and I give an introduction to stock options. I discourage anyone from trading.

This article emphasizes intuition instead of technical detail.

The mechanics of stock options are simple. Options pay the difference in money between the stock price and a predetermined price, called the strike price. I’ll just call this “strike”.

Call options pay money if the price of the stock is above the “strike” of the call. If the price of a stock share was $300 and you owned a call with a strike of $200, the call option you own pays $100.

The other mechanical rule to know is that stock options have an expiry date. At this date, the option pays according to the rules above, and disappears. These expiry dates can range from today, to several years from now.

One can claim that’s all the mechanics you need to know. Despite being the only thing that gives an option value, it’s useful to set aside these details .

Importantly, options have a price. This is the price you pay to own it, and is not the same as the strike price. Even options whose strike prices are far away from the share price, and so have almost no chance of ever paying out money, are traded usefully and have a price.

It’s this price, not the mechanical payout, that is the tangible price you use when trading. What’s important is the relationship between the price of an option and the stock price. If you understand the relationship, and know how the stock itself will move, options can greatly enhance gains.

You likely already understand many of these relationships, because like most people, you have dealt with with options extensively.

A relatable example is a job offer. A job offer is literally an option—it’s something you don’t have to accept, but you may want to. This option has a value to you, one you could put a dollar figure on. While the analogy to stock options isn’t perfect, we can use it to get valuable intuitions.

The first intuition is that there’s a “time value” of most job offers. A job offer that you had to make a decision on within a week isn’t as valuable as one you have a month to mull over.

This intuition directly applies to options. Options which expire later are always more valuable than ones that expire earlier.

2.2 Options can be volatile when they have little value

The second intuition is more nuanced. It’s about how the value of the option changes in percentage terms. The summary is that options tend to change in percentage value rapidly when they are close to worthless.

Putting numbers on this, let’s say I have an offer that only matches your current salary, so it’s worthless. I sweeten it by adding $50,000 to the offer, so the offer is now worth $50,000. The difference in value between the two offers is huge, it was zero and now it’s $50,000.

The intuition from this is that given the same absolute change, it’s riskier to hold something whose value is closer to zero. In the case of stock options, a movement in the stock price can affect worthless options more.

Also, in the case of the $200,000 to $250,000 offer, in a sense, you’re dragging around all the extra money, whose value is not affected by the changing offer. This intuition directly applies to options. If you think a stock is going to rise, you want to buy only the part that is changing, and not value that doesn’t move.

The above should suggest why options are so powerful. You can dial up both your gains (and risk) by choosing the right options.

That’s all the knowledge you need to make a huge amount of money if you can predict how the stock moves.

These also describe my trades that I’ve made:

It’s important to consider is that there’s multiple, often contradictory motivations for any trading decision. Afterwards, it’s hard to describe this process and easy to create false narratives after the fact. Because I’m aware of this, I’m going to be cautious about describing my trading.

Also, I’m ambivalent about trading. Overall, I can describe my trading like this: I traded based on my theories about how I could make a profit. Despite making the correct decisions in the moment, most of my ideas were proved wrong, but in ways that resolved in my favor.

If you’re looking for a specific trading tips, I don’t have any for you. But I do have one suggested way of using options below (note that this is relevant as written in late 2018):

If you want insurance against a down market, you can buy puts on Tesla that expire a long time from now (more than 500 days). As described above, puts are stock options that increase in value if the stock goes down, so you are “insuring” that Tesla’s stock price falls.

Like many kinds of insurance, you should consider the money you paid for it to be gone. With this in mind, you stand to make money if there is a mild recession in 2019. You stand to make a huge return if there’s a big recession. I hold such a position now.

It’s exactly this strategy that started my option trading. The below shows the trade and its outcome as “Trade 1”. 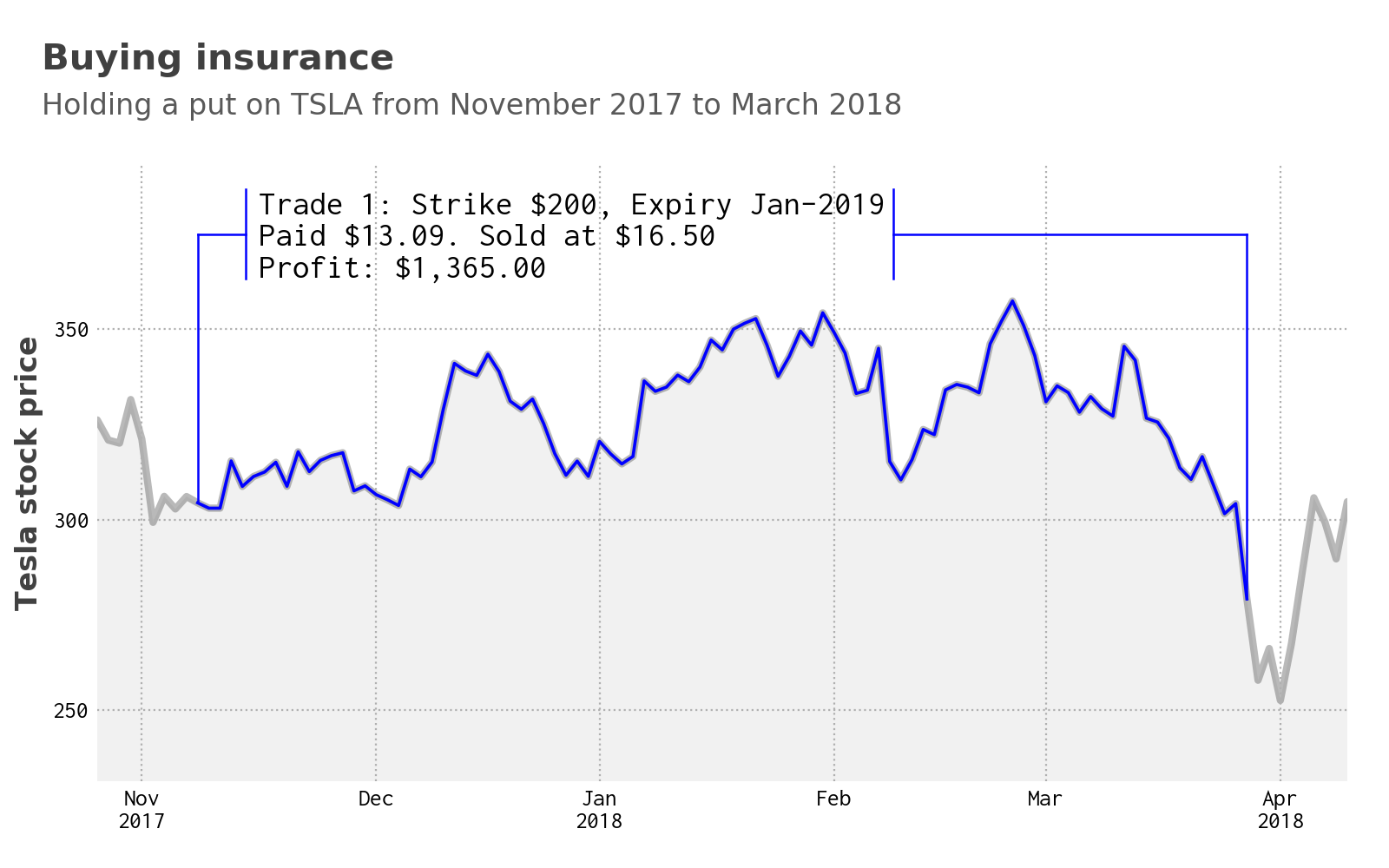 The puts are designed to profit if the Tesla’s stock fell in value. The stock price did not do this. Instead, it was volatile, rising and falling dramatically.

Although I held the puts as insurance, I made no profit from the major decline they were intended for, but instead collected a gain during one of these dips. I soon bought new puts with the exact same strategy. This is trade 2 in the figure below.

This volatility seemed driven by media articles that were of low quality, and caused by the CEO’s behavior. The ups and downs went on for months. After watching this happen about 7 or 8 times, this see-sawing seemed predictable, literally. Originally, I had no original intention of trading shorter term options, but these movements really dragged it out of me.  To test my predictions, I bought some short-term calls, shown below as trade “3”. 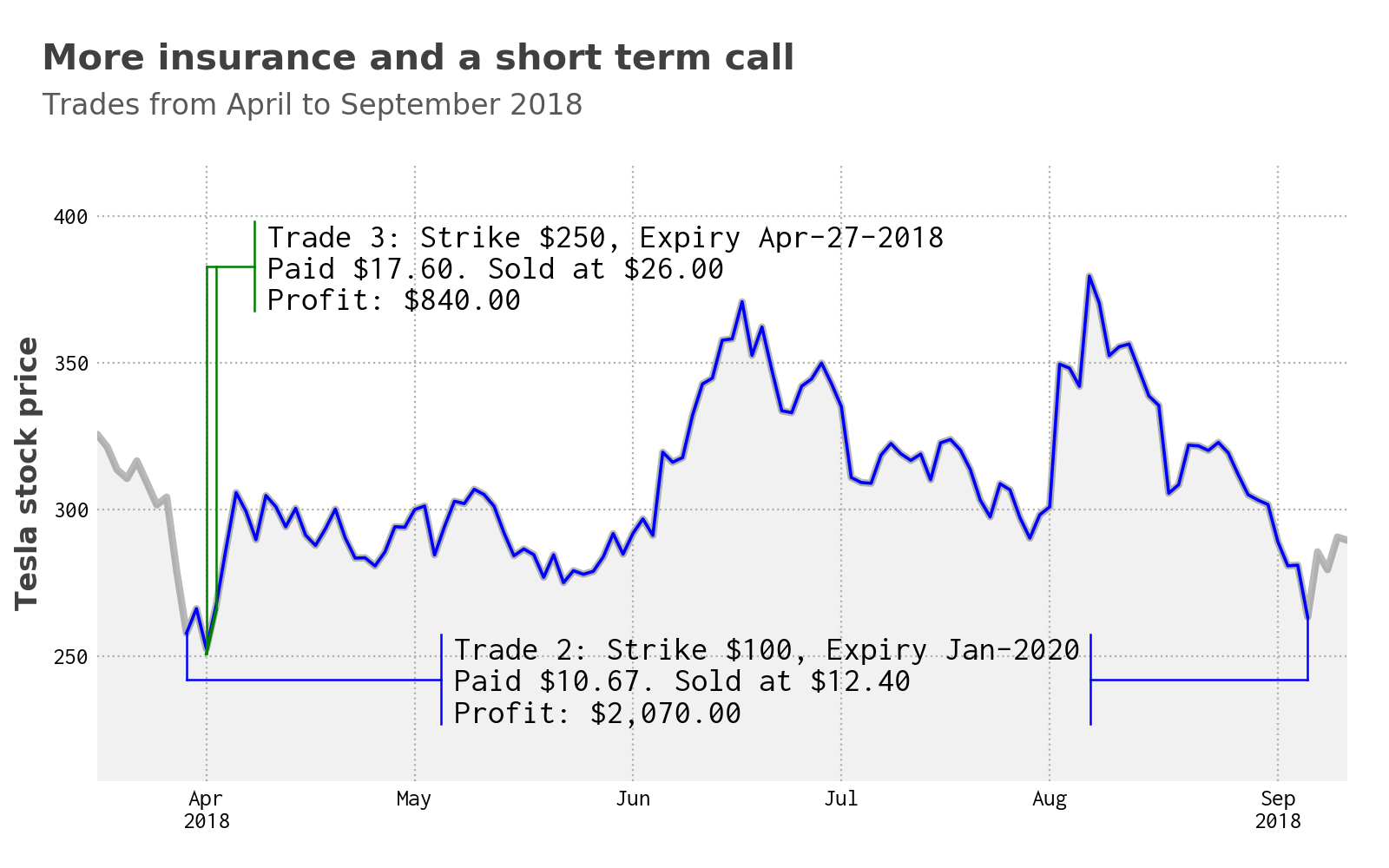 For these short term calls, I was rewarded with a small profit. Also, the puts in “trade 2″ were sold months later, for a profit as well. This is despite the stock rising. How could this be? A reasonable explanation is that there was an increase in the risk of buyers of Tesla’s stock. In the same way that car insurance rises after an accident, the price of the puts rises if investors decide the stock is riskier. (As an aside, it’s worth pointing out that this explanation is a story, and is never truly complete.)

Returning to the perception of the stock during this time, the structural issues in the company became better publicly recognized. Negative articles began appearing in major publications such as the NY Times and NPR. However, these articles tended to be tentative and hedging, recapping well-understood problems.

Seeing another such dip based on superficial news, again, I bought stock options, shown as “trade 5” below. These were call options that expired within a week. Again, I was rewarded for them. 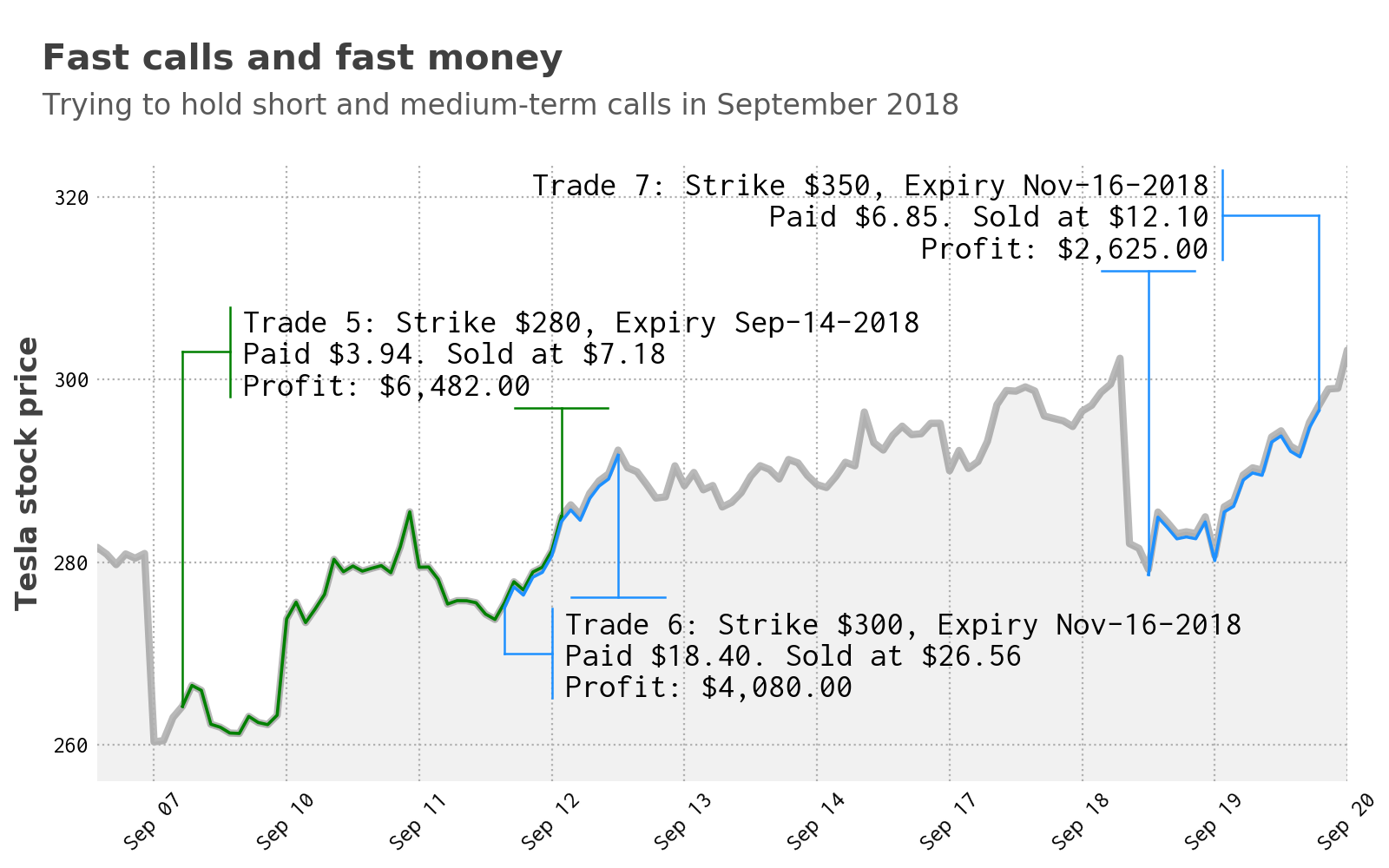 In addition to the week long calls, I made trades “6” and “7”. These were medium term calls and expired two months away.

The medium-term calls are more nuanced than the purchase of insurance, or the short-term calls. By buying them, I’m trying to get into a “position” to profit, with multiple motivations:

These are three separate reasons are why I made “Trade 6” and “Trade 7”.

Despite this longer-term theory, I had to leave immediately, making profit.

It’s worth commenting on why I left. One interpretation is that I bought on a dip, and took my returns. The gains that I expected over months took just hours. That’s a fair statement, but incomplete and shallow.

Another explanation is that this rise was unexpected and disturbing to me. The sharp gain caused me to question my understanding of how the stock would move. I no longer knew whether the increase from the short term business outcome would occur in the way I predicted. I left my position as a result. In this sense, I was forced out by Tesla’s stock price.

This is an important point here, and that is you can make mistakes in the positive direction. When the position is low, or I lose money, I expect this and I’m usually fine with it. When I’m suddenly making a lot of money, I become concerned. It’s not acceptable to make money and not understand why. While unintuitive, it’s important not to reward yourself from positive gains from mistakes. This situation felt just like such a “positive” mistake.

Another important comment is that while my timing seems good on many of my trades, my decision were always about the expected value of the making the trade, and the risk I am taking in doing so.

That’s it. That’s my trades. I started by thinking there was a risk of a major downturn and I took out insurance by buying puts on Tesla. I was wrong—but I won anyways because of Tesla’s instability. When I bought calls for a medium term movement, I never got the chance to see this play out because the stock rose so quickly and I won again.

I am ambivalent about trading and do not encourage anyone to do it.

For completeness, here is a table of my stock trades. The symbol is the proper stock symbol. The P/L is the profit or loss.